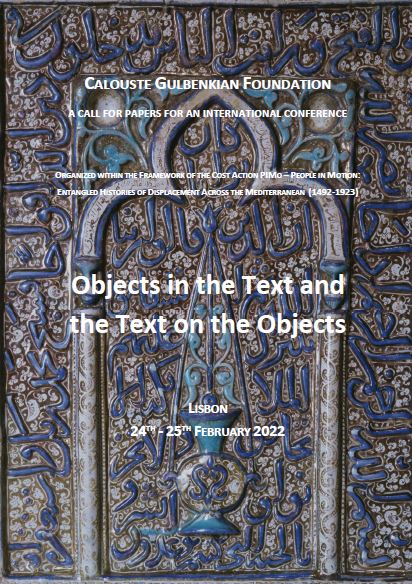 As part of our tangible cultural heritage, historic objects play an essential role in the construction of our social memory. Objects have different meanings and uses for different individuals and communities, and many objects have embedded texts or are accompanied by texts. All have different functions. These texts are intimately connected to the objects and, usually, but not always, help us to understand their role in the community, society or within the context in which they are used, reused or displayed, as in the case of objects kept in museums, archives and collections. The range of texts appearing on objects is very broad. They may contain information about the production or the producer of the object, references or a tribute to its owner, an explanation of the function they have or are meant to have (as in the case of amulets with apotropaic formulas, flags, items of clothing or co ins, for example). They may contain narratives of different kinds, or they may also have a more distinct decorative function such as the Arabic calligraphic script adorning all sort of objects from bowls to buildings. Likewise, texts often contain detailed descriptions of objects. Objects are recreated, for example, in literary texts – from the real, to the fictional, to the evocative – or are listed or described in different kinds of historical texts and archival sources such as probate inventories, auction records, commercial documents, lists of diplomatic gifts, etc.

The workshop Objects in the Text and the Text on the Objects will investigate these relationships between objects and writing, exploring, on one side, the characteristics and peculiarities of textbearing objects and, on the other side, the different kinds of texts containing lists or descriptions of objects. The focus will be on moving and connecting objects and texts that cross, interact, and often relocate within the Mediterranean in the Early Modern Period. This workshop will also explore how the relationships between objects, writing and their movements, can be connected to the expression of human emotions.

We invite contributors to present papers focusing on a particular text-bearing object(s) or text(s)
dealing with objects which can be used as case studies.