This research aims to study traditional practices of witchcraft and the circulation of witchcraft objects by examining the trial records of the Spanish Inquisition in the Canary Islands from the fifteenth to the eighteenth century. The purpose is to focus on the cultural melting pot of the Canaries, where the so-called magic ritual practices of enslaved African people, coming from Maghreb and West Africa, merged with those of the indigenous people, also known as the Guanches, and the conversos. My research explores how people accused of being witches and wizards reused, replaced, and reconfigured the use of daily objects to perform magic rituals.

Ordinary objects, such as scissors, mirrors, stones, and bags, became tools of magic in the hands of a witch. Inquisitors were often astonished when they found these items in the houses of people accused of being a witch. My hypothesis is that when the witch uses and puts into motion such objects, power and authority is conferred upon her. In other words, it is the relationship between the woman and how she uses the objects that makes her a witch. It was through such processes that generated the inquisitorial accusation.
Thus far, I discovered curses, images, and prayers in documents from the trials, some of which, were written by the accused. These kinds of documents are extremely rare to find in Catholic European states during the early modern age.

Speech and gestures were also crucial to these ritual practices and for the activation of objects. What made a woman a witch in the eyes of the inquisition was the power that she could impart to ordinary objects, which it was believed she could then use to manipulate a person by fusing object and word. The word is almost always accompanied by gestures; the combination of these two elements created spells of all kinds, and most often, they were created for healing purposes.

I discovered in the trial records that the bolsa – neck amulets that contain ingredients for ritual practices or lucky stones – are frequently noted in these documents when referring to objects belonging to African witches. The word bolsa, whose description in these texts corresponds to the women’s bolsas used for magic, was an object that was regarded as evidence of the “demoniac pact” between woman and object by the inquisitor writing the report. An example of this object can be seen on display at the Anthropologic and Ethnological Museum in Florence in the Africa room (photo n.1). What emerges clearly from the trials is that women brought these objects from Africa during the diaspora and were deeply connected to them almost as if they were indispensable for their survival in the new land. 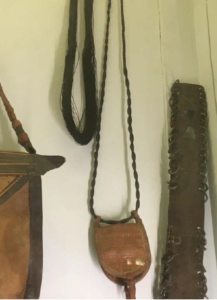 Documented in some of the trial records are other types of physical objects, that are described as proof of contact with the devil. In the example of the spell book, from the Museum of the Canary Islands, this little book of magic contains a written spell and ritual. This book is composed of 14 pages and contains the element of a Solomonic spell, practiced by Jewish people (1527-1560). The Solomonic magic was derived from Talmud legends of miraculous virtues of King Solomon’s Signet.

In the Canary Islands, there was a large Jewish community that, after the Alhambra Decree, were forced to leave the Iberian Peninsula. This book demonstrates how knowledge of magic amongst Jewish people was transplanted to the Canary archipelagos close to Africa. While this sorcery was prevalent in the Canary Islands as well as Portugal, it would seem that the conversos may have known very little about this particular type of sorcery as it appears to be an isolated case. However, during this same period, there is evidence that the conversos started practicing African magic and mixing these practices with their own. Moreover, the defendant of the trial, from which this image derives from, had to have been a fairly cultured person, who had previous knowledge of such formulas. 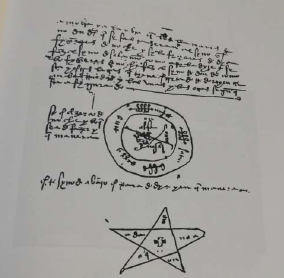