In his reports, in the Annales du Museum national d’histoire naturelle (1802), of the results of his zoological research following Bonaparte’s expedition in Egypt, there was no hiding Geoffroy Saint-Hilaire’s great satisfaction. The mere discovery of the Polypterus bichir, he wrote, “would make up for all the effort that a long-distance journey usually entails.” It was indeed an important discovery, one of several made by Geoffroy during his scientific journey. The study of the anatomy of this unique fish gave a substantial contribution to his thesis about the anatomic evolution of the species; it was also particularly interesting as living evidence of the ancient Egyptians’ “fish of the Nile”, whose theogony Geoffroy investigated in another memoir in the same year. (Fig. 1) But there was also another and more general reason for Geoffroy’s enthusiasm in describing his zoological discovery. In effect, these discoveries were also a great relief, if we are to reflect on what had happened to other natural scientists, mainly botanists, who had performed painstaking research in Egypt to look for new species to add to the universal map of flora. Their experience was indeed disappointing – “Egypt gave them barely twenty different species” – nor was that of the mineralogists so different. Where they were looking for diversity, they instead discovered a strong similarity. 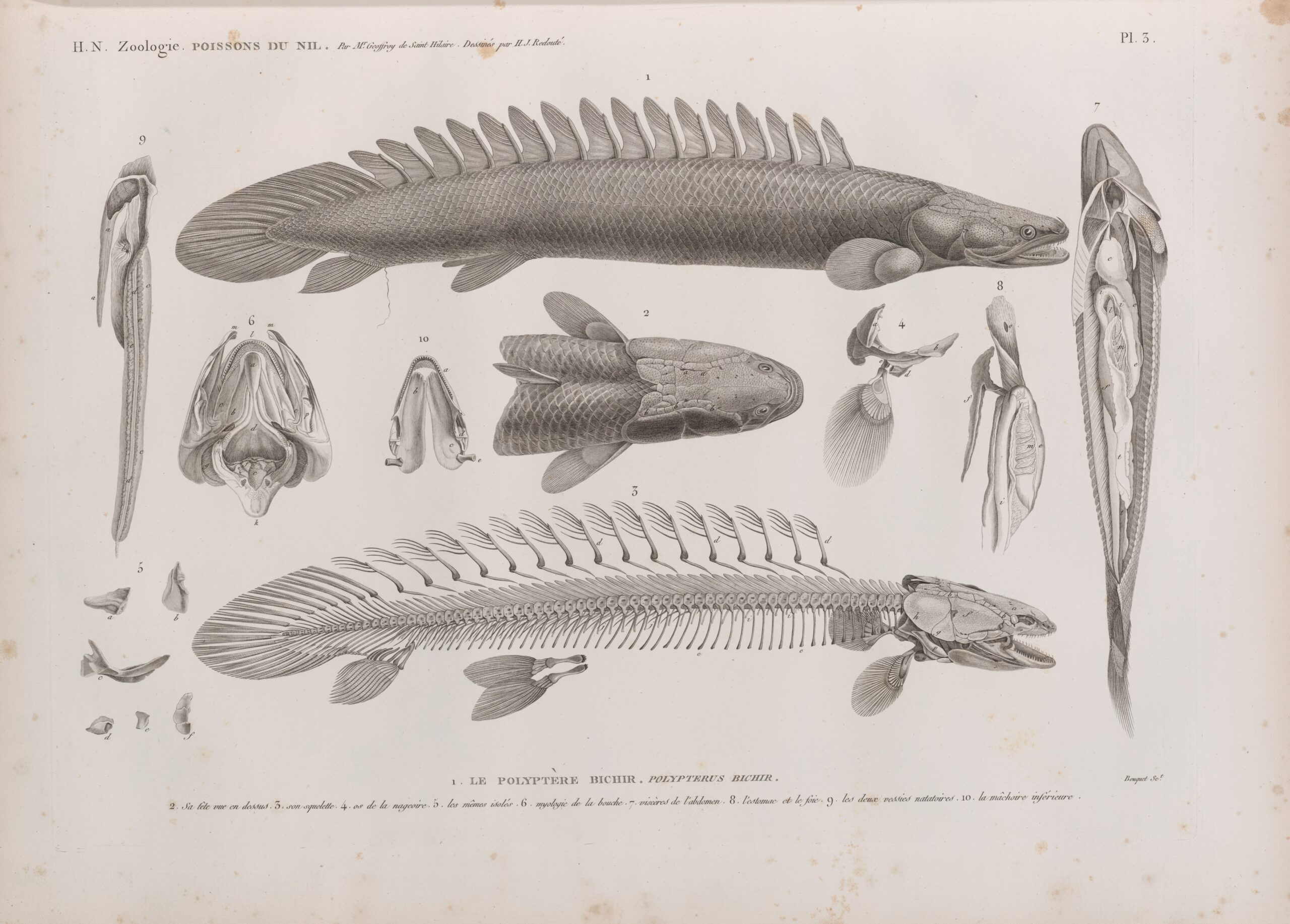 The “other” world of Northern Africa and Western Asia – “other” mainly from the point of view of manners and customs, religion and institutions – was an extremely similar world from an environmental point of view. What Geoffroy remarked was proven by the experience of many celebrated botanists, such as Bory de Saint-Vincent, and others beside. The “invention” of the Mediterranean, as it has been rightly defined, was the result of a complex conceptual development, in which the environment played a primary role, to be considered with cultural and political differences. The result was an ideology of “Mediterraneanism”, in which, on the scale of civilization, it was the responsibility of the most advanced nations to unify, at a higher civic and political level, what nature had made uniform and history different. This approach had an important role in shaping the expansionist ideology of the European nations, France in particular – from the expedition in Egypt to the conquest of Algeria and so on. It was indeed a scheme which could incorporate various kinds of discourses and representations; a scheme, in its general shape, very similar to “orientalism”, and actually operating in various ways, although varieties and differences, discordant voices and critical approaches can be made out which render it less simple, consistent and effective than it might appear. The making and the varieties of this approach can be followed and observed in various cultural contexts, not only in France, and so it can be deemed an important aspect in shaping the European concept of modernity.

On the Italian side, for instance, in the first of the three volumes on Africa of Costume antico e moderno – the impressive and preciously illustrated editorial enterprise directed and largely written by Giulio Ferrario in Milan – the author cannot avoid remarking that in the fertile Nile valley “all of the most exquisite European fruits are cultivated with utmost care”. (Fig. 2) 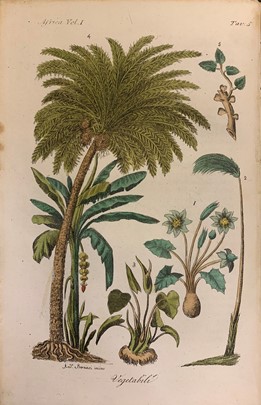 In the Aggiunte e rettificazioni (vol. II, 1832), published in order to add new and updated information to the major work, he remarked that in the splendid and pleasant environment of Barbary, among myrtles and figs, olive trees “better than in Provence” and various kind of grapes “despite a religion opposed to Bacchus”, the botanist could feel as if he were a paradise of familiar flora and “would forget the fatherland there, were he not frightened by the spectacle of barbarism”. The opposition between nature and social context was clearly highlighted, but, while devoting his attention to the decadence of civilization under the despotism of the Ottomans or the rulers of the Barbary coast, Ferrario also suggested another reflection. Again in his pages on Egypt he put forward the suggestion that the magnificent variety of the Nile valley’s flora was not exactly a “natural”’ gift, but the result of human intervention and a long history of adaptations and acclimatization which changed the face of landscape and plant production. Just a few words and a suggestion, but worthy of attention, I think, as well as opening a perspective connectable to another view of the civilizing process. We could proceed on this path towards other ways of conceiving the relationships between the major and powerful nations of Europe and the southern and eastern shores of the Mediterranean while inspecting the various ways in which the civilization process and the very concept of civilization was conceived and transformed, particularly in that critical period between the last decades of the eighteenth century and the first of the nineteenth. Inside the framework of the Saint-Simonian school, for instance, the representation of the Mediterranean as “the nuptial bed of the East and West”, like in the famous and fascinating sentence by Michel Chevalier, was considerably different from the hierarchical view which emphasized the virtue – in a way the duty – of imposing liberty and civilization and solicited conquest. It instead showed that not power, but science, technology – to be shared as universal gifts – and communication above all would change the world and make human societies better. The nature of the Mediterranean was not, from this point of view, the premise of conquests but, beyond a long history of wars, violence and intolerance, the most favourable condition for a real new world of brotherhood and an alliance of connected differences. Elsewhere, on the British side for instance, similar attitudes can be made out, clearly going against the main expansionist trend.

In fact, the idea of a uniform environment as the natural basis for the establishment of a “Mediterranean world”, led back to civilization by power, became widespread as the nineteenth century progressed. Popular literature, narratives and iconography offer clear and important evidence of this. For instance, in a prevalent work like Mœurs et coutumes religieuses de tous les peuples du monde, collected by Casimir Henricy (vol. I, 1847), the narration begins with Africa and Oceania and ends with Europe, in order to “proceed from bottom to top, from the lowest to the most perfected” as “these naturalists, [who] to build their nomenclature, go from small to big, from the simplest animal to the best organized being, from nought to the complex number.” Taking Algeria as the starting point was obviously also imposed by recent events which, since the French conquest beginning in 1830, had been attracting “the attention of all classes of French society”. Its natural environment, as we noticed in previous texts, was magnificent and familiar at the same time; it was a “privileged land, which partakes of the European climate and of tropical nature; veritable African Provence, which seems destined to become an annex of France sooner or later.” It was quite obvious that this “Provence” placed outside the French geographical boundaries would be reincluded in its natural framework – a discourse on human races was also developed to support this conclusion – and France had the noble responsibility of accomplishing this. And so, this kind of Mediterraneanism showed its exclusive and hierarchical face, with all its long-lasting consequences. Other “Mediterraneanisms”, however, were possible and active, as suggested, and from the start, the emerging “Mediterranean world” – which took shape as a concept in the last decades of the eighteenth  century – showed many more colours than it might seem by looking at the prevailing ideological trends. Hence, it offered a particularly interesting laboratory of investigation.