The first Monti di Pietà or mounts of piety, public banks that provided solidaristic credit, date from the 1460s. It is generally thought that the first was founded in Perugia in 1462, while the Monte di Bologna opened its doors about a decade later, in 1473. The service offered was similar to that of the loan bank-pawnbrokers mainly managed by Jewish bankers that had been present in almost all towns in Italy since the 13th century. The Monti differed from this previous institution in a significant  way. First of all, from the outset they were public institutions whose aim was to meet citizens’ economic needs by offering a service that could be classed as providing a form of welfare. Another significant difference lay in their target of customers, the so-called pauperes pinguiores (the least poor of the poor), to whom they granted small loans at favourable conditions requiring the sole reimbursement of 5% per annum in management fees, with the aim to help the clients to get through periods of misfortune. But the key novelty of the Monte’s service was its provision of an additional form of solidarity and welfare to the range of initiatives on offer for citizens in need. As such, credit was recognised as an indispensible service that cities had to ensure. In order to get the new institution up and running, it was crucial to convince the authorities and citizens to make the necessary money and premises available. Moreover, the payment of low interest, which, while justified, also met with ideological opposition, had to be seen as acceptable. This mission was undertaken mainly by Observant Franciscan friars, who successfully got the message across by recounting previous experiences, taking effective arguments to the streets (at times starkly attacking the Jewish moneylenders) and using powerful images. 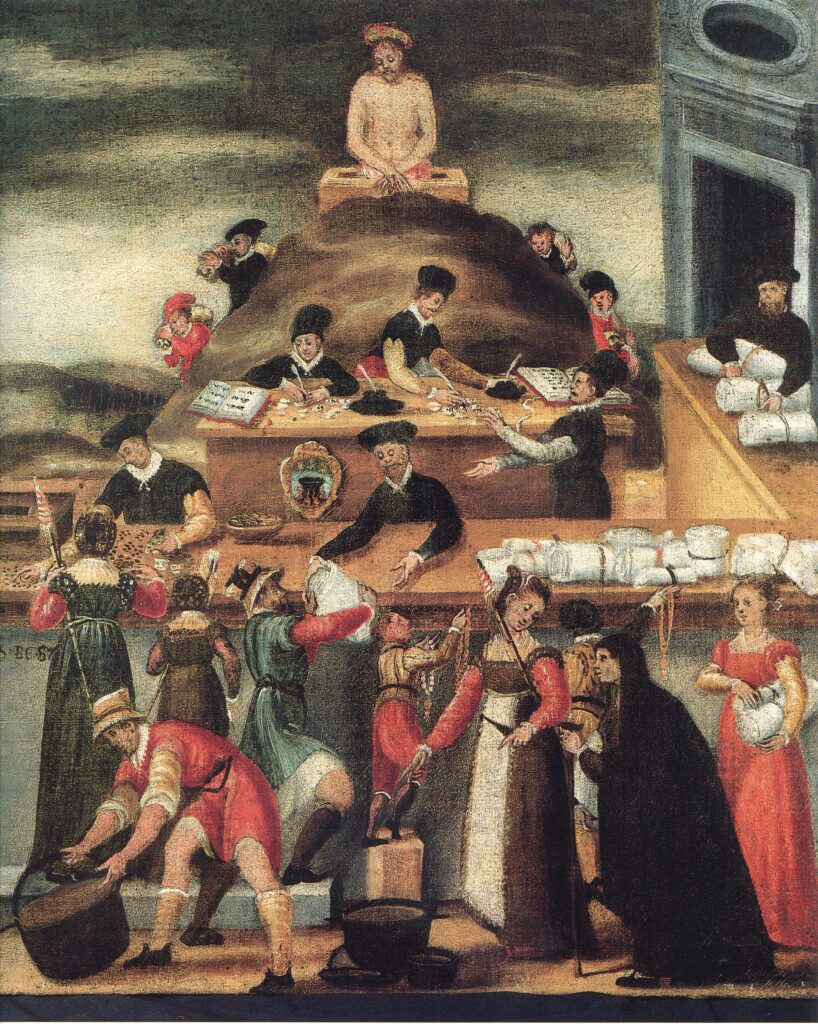 Images play an important role in the history of the Monti. Two main images accompanied and supported the institution. The first depicts a mount, meant as the mountain of resources used to provide the solidaristic loans, and as Calvary, the place of Christ’s suffering. The second portrays the Man of Sorrows, the most ‘devout thing’ that can be represented: the Dead Christ showing his wunds. Therefore, images of one or more mounts surmounted by a cross and of the Man of Sorrow (Fig 1.) appear on Mount of Piety charters or alms boxes, in lunettes over institution doorways and on banners carried in fundraising processions. The processions marked the stage when the idea became reality; once the initial capital (the ‘mountain’ of resources) had been gathered, also thanks to these attractive, persuasive, and moving images, and the Monte could start to operate.

While the image of the Mons Pietatis had to be at once new and traditional, the real novelty lay in their systematic use to arouse emotions. The words used by the preachers, in particular the renowned words of Bernardino da Feltre (1439-1494) who was ‘specialised’ in propounding the foundation of Monti di Pietà, were also meant to impress, engage, and even disturb. During his lifetime, this highly effective preacher held over 3,600 sermons, preaching for a total of 15,000 hours. From 1471, the year of his first series of Lenten sermons, to 1494, the year of his death, he covered around 17,000 km on foot. During the period of his greatest commitment to the Monti – the last five years of his life – he walked almost 6,000 km. Much headway was made, not only by Bernardino in his travels, but by the idea itself and for over a century new Monti continued to be established in different parts of Italy. A total of 215 Monti were created from 1462 to 1562. Later on, several Monti were also established outside Italy, in France, Spain, and the Netherlands. In the Mediterranean area, they were found in Malta, Istria, and Dalmatia. The institutions were soon set up in the Greek territories under Venetian rule; a Monte operated in Rhodes from 1505 to 1522, when the island fell to the Ottomans. In Crete, the first Monte was established in 1613 and from then on these institutions spread throughout the Venetian Stato da Mar in the Levant. In short, an idea was afoot that has also borne fruit in modern times, suffice it to think of microcredit which is similar in many ways to these late-medieval initiatives whose insight was to use powerful images to link the institution to the cities and their needs, founders and values.

The images accompanying the Monte alluded to a sphere of traditionally Christian values: compassion, piety, and participation in other people’s suffering. The pain was rendered by numerous variations on the theme of the half-length image of Christ coming out of the tomb: evoking the suffering of God and his salvific sacrifice in accepting the condition of man to partake of human suffering. In the same way as Christ was willing to share the fate of those suffering, a request was made to those citizens with the possibility of alleviating the condition of the needy to feel compassion for their needs and consequently support the Monte. It was with this aim to arouse compassion that many Monti displayed touching representations of Christ’s suffering outside or inside the institution. These images spoke to the people of the time as part of a language that involved the observer in a dialogue hinging on emotion. 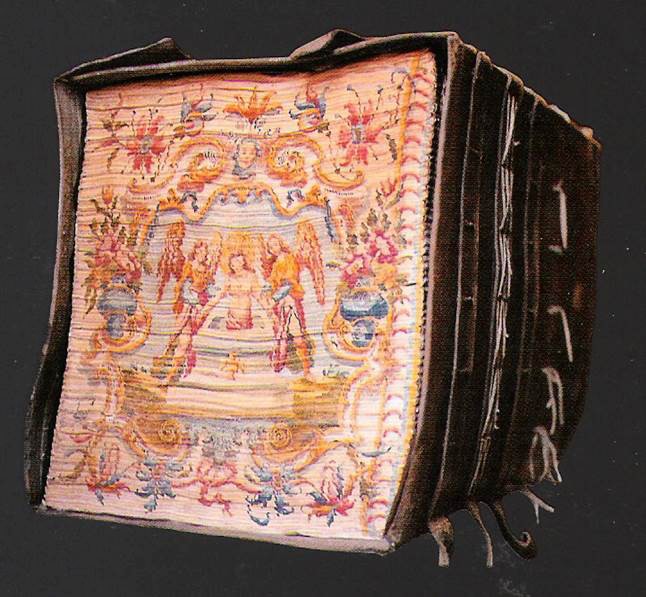 Some representations have come down to the present day and their message is still loud and strong. This is the case of the late sixteenth-century picture ‘Il pignoramento’ (‘Repossession’) by an artist from Faenza. (Fig. 2) The picture represents the general idea at the basis of the Monte, but also the different moments in the institution’s life. At the top of a mount, the half figure of Christ as Man of Sorrow emerges from his burial place. Around the mountain, people walk to and fro, with sacks over their shoulders representing the materials made available (donated, loaned or deposited) to the less well-off. The central part of the scene depicts the life of the institution with the Monte officials intent on accepting and evaluating pledges, giving out money and writing. Indeed, the institution required a great deal of writing, as recommended by the same Bernardino da Feltre (sermon no. 55, held in Pavia on 15 April 1493, in Sermoni del b. Bernardino da Feltre, edited by C.Varischi da Milano, Milan 1964): ‘Oportet habere domum securam pro conservandis pignoribus. Oportet etiam habere librum et facere buletum, et multas scripturas etc.’ (Safe premises are needed to store the pledges. It is good to have many books, issue receipts and make a lot of written records). These records were the way to make the Monte’s activities public and transparent. The bottom part of the scene shows the relationship with the customers as women and men hand over jewellery or pieces of fabric. There is one particular figure who stands out from the other customers, who are active people fit for work and therefore who will hopefully be able to return what they have obtained on loan. It is a woman dressed in a long, dull grey cloak and leaning on a stick, representing the very worst-off, who will probably have to turn to other institutions than the Monte to find support.

The probable knock-on effect of the need for multiple, easy-to-inspect records and transparency of the requested interest (the charters set out that the expenses had to be reimbursed and indicated the amount so there was no point in hiding it) was great attention to carefully compiled and diligently stored account books. The Monti had to keep from two to seven account books or records of the different phases in the life of the institution, and many of them have come down to us today. In many cases these records bear the ‘logo’ of the institution, that is, the representation of Christ suffering which had become the emblem of the Monte. In Bologna, the oldest representation of the scene in the institution’s documents dates from the sixteenth century and appears on the front cover of a prioral guidebook (‘Breve compendio et regola del signore priore del sacro Monte di Pietà di Bologna’ [‘Short Compendium and Rules for the Prior of the Holy Mount of Piety of Bologna’]), while other splendid portraits can be seen on the edges of books of entries (Libri giornale) with the neat copies of the day-to-day accounts and the main ledgers (Libri mastri) recording the opening of personal accounts. Some of the Monti’s books are truly magnificent objects, such as the account registers today held in the Monte di Pietà of Bologna archive, amongst which 138 large-format account books dating from the sixteenth and seventeenth centuries. 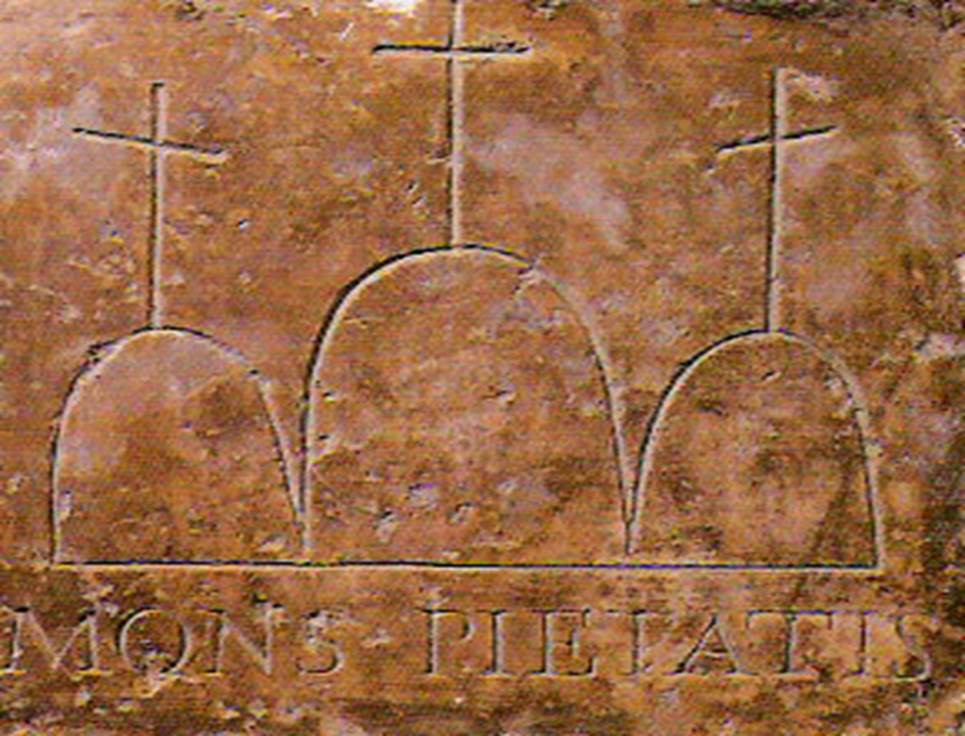 Account books are probably one of the objects that we least associate with art. They immediately conjure up dull images of numbers, records of mechanical and repetitive operations: we would never think that such documents could be of aesthetic value. The cash reintegration book (Libro di rincontro di cassa) from 1795. (Fig. 3) belies this idea and represents the will to transform registers and ledgers into veritable works of art but also not to lose contact with the institution’s history and original values. The specimen shown here incorporates a complex mix of administrative requirements, archival practices, iconographic projects, and social, economic and at the same time religious agendas. They are all embodied in  material form in a document reflecting a successful scheme and symbolic construction. As an object, it is useful and at the same time gratuitously beautiful, since the records were for private consultation and not for public display. The culture and history behind this book is summed up by the Imago Pietatis: the powerful, dramatic image of Christ suffering, dense in meaning, embellished by enchanting decorative motifs. Colourful anemones, roses and violets, with their different symbolic meanings, accompany and at the same time distract from the numbers and accounts that are the account books’ raison d’être, showing how this kind of document can mix sense and sensibility, usefulness and beauty. In all its forms, the Monte di Pietà wanted to remind people that providing credit is not only a necessary service but that it can actually save its recipients and safeguard the community by helping to maintain human relations. A notion of all this can also be gleaned from the pictures painted on the edge of a prosaic account book.