Nasser Rabbat, Where Europe Begins and Where It Ends?

It is said in the myths of the Greeks that the Phoenician Princess Europa was playing on the seacoast of her city of Tyre with her attendants when she was lured by the great Greek God Zeus who had disguised himself as a white bull and abducted her to Crete where he made her queen. 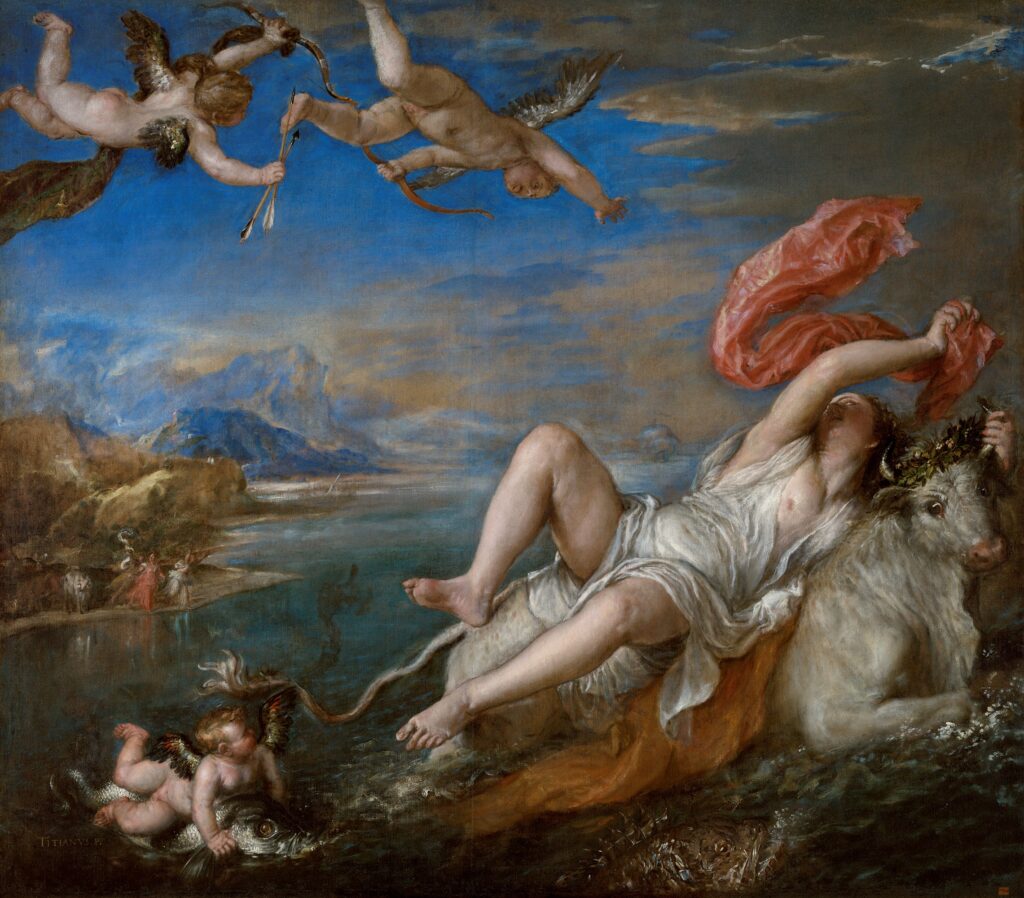 Europa eventually gave her name to the continent north of Greece in a clear symbolic reference to the passing of Civilization from the East Mediterranean to the continent that was hitherto nameless, and thus unselfconscious.  This mythical cycle was completed by the story of Cadmus, Europa’s brother who was sent by his father, the king of Tyre, to look for his kidnaped sister.  Cadmus did not find her, but he ended up settling in Greece and founding the city of Thebes, of which he became king.  He then taught the Greeks the Phoenician alphabet, from which the Greek alphabet was derived; that is, Cadmus gave the Greek the tool that they will brilliantly use to ignite their knowledge revolution.  In other words, Europe, according to the founding myths of the Greeks, acquired its name from a Middle Eastern, Semitic, Phoenician princess, whereas the Greeks learned the arts of building cities and writing from her brother Cadmus, also a Middle Eastern, Semitic, and Phoenician prince.The torch of civilization thus passed from the East to the West in archaic times, at least this is what the ancient Greeks believed and many of their thinkers matter-of-factly conceded.  That Europe will ultimately claim Greece to be its civilizational cradle did not necessarily entail the acknowledgment of Greece’s Middle Eastern/Semitic epistemological roots.  In fact, as Martin Bernal so forcefully argued, the opposite happened.  Scores of European Enlight ent figures in the 18th and 19th century mounted a sustained effort to cleanse the Greek heritage that they appropriated from its Middle Eastern impurities, even though some echoes of that lineage made their ways into the public realm, albeit in hard to find places, such as this intriguing painting L’Etude et le Génie devoilent l’antique Egypte à la Gréce painted by François Edouard Picot on the ceiling of the sixth hall in the section of the ancient Egyptian collection at the Louvre and commissioned by king Charles X in 1826. 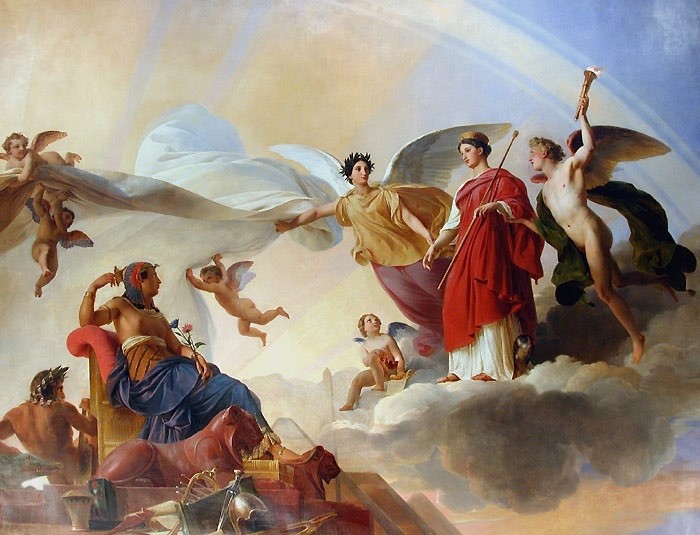 This thoroughly neoclassical painting depicts the encounter between Greece and Egypt prompted by personified Learning and Genius.  A Hera-like Greece stands on a cloud with a crown on her head and a specter in her hand, as symbols of power.  She is flanked by a winged Learning with laurels and a naked Genius carrying the torch of knowledge.   Learning and three putti are lifting a white drape to unveil a seated, topless Egypt with each a lotus and a papyrus in her hands, symbols of the unified country, but also of its most significant gifts to culture: material to write on and form to inform architecture. Crowned with the Horus head, Egypt is surrounded by references to its wonders: the three pyramids, an obelisk, a couple of red sphinxes, and a personified Nile leaning on a crocodile.  More objects in the foreground further evoke the image of Ancient Egypt for a neoclassical age that has just discovered the riches of that mysterious country after the Napoleonic invasion of Egypt (1798-1801) and the ensuing publication of the first edition of the monumental Description de L’Égypte.  That extended connection, first discovered by the savants of the Napoleonic invasion in the temples of Pharaonic Egypt was now represented on the ceiling of the Louvre, the premier repository of culture in France, that links Europe to Egypt via Classical Greece.

Yet, Europe, at that triumphant age when it was figuratively and militarily conquering the world, could not tolerate an indebtedness, no matter how small or remote in time, to lesser cultures, which were then the target of European expansionism and colonialism.  Thus the continent invented for itself an exclusive civilizational sequence that started with the ancient Greeks, with a nod to Pharaonic Egypt that could not be ignored, and ended with the modern era passing through Antiquity, Early Christianity, the Middle Ages, the Renaissance, and the Neo-Classical without even rubbing against those cultures that shared not only the geography of Europe, especially around the Mediterranean, but also the history of the Classical age from Alexander the Great to the fall of Constantinople to the Ottomans in 1453.  In other words, the Arabs, Amazighs, and Turks of the Mediterranean, according to the modern myths of Europe, do not belong to the classical civilization even though it evolved on their land at the hands of their ancestors for a thousand years and very directly shaped their cultures, past and present.  Instances that contradicted that exclusion, such as the introduction of monotheism, the nurturing of classical knowledge in the Eastern Mediterranean before and after Islam, and actual Islamic philosophy and sciences rooted in the ancient epistemologies, were explained away as oddities or aberrations provoked by singular historical circumstances.

This binary opposition is problematic in and by itself for it fails to account for the fluidity with which ideas, techniques, as well as people and material have crossed all kinds of boundaries throughout history.  But this is the least of its liabilities, for, embedded in its seemingly simple linearity and direct contrast is a hierarchy that sees the West as the originator of all modern culture and the Islamic world, as well as other culture-specific, non-Western traditions as late comers and imitators.  This is an oppressive model in an absolute Foucauldian sense; that is, power floats between its two ends in one direction from the dominant West to the vulnerable rest of the world.  It is also the conceptual source of the hegemonic structure that effectively controls the intricate network of cultural, epistemological, aesthetic, and even marketing conventions that produce, evaluate, and use culture today.

Moreover, this system, which depends on deeply rooted ideological postures and the unequal economic and institutional power relation more than historical facts or intellectual reflection, exerts extraordinary influence on the conceptualization of both the West and the non-West, including of course that emanating from the Islamic World.  It reaffirms the authority and creativity of the former and pushes the latter back to marginal, derivative positions, or, at best, politically or culturally situated ones, just like Egypt appears on the ceiling of the Louvre.

Nasser Rabbat is the Aga Khan Professor and the Director of the Aga Khan Program for Islamic Architecture at MIT. His research interests include Islamic art and architecture, urban history, heritage studies, Arab history, and post-colonial criticism.  His most recent books are ‘Imarat al-Mudun al-Mayyita (The Architecture of the Dead Cities) (2018), and an online book, The Destruction of Cultural Heritage: From Napoléon to ISIS, co-edited with Pamela Karimi (2016).