Social history and art history are still often hermetic to each other. Their respective methods, the nature of the documents that scholars consider, and academic territories diverged, if not clashed. Nevertheless, several recent works from early modern urban historians have strongly advocated for an inclusive approach. For example, Melissa Calaresu reinterpreted eighteenth-century Neapolitan sociability with a micro-historical methodology at the intersection of social history, art history, and archaeology. On the other hand, Nancy Um has implemented an original approach at the intersection between economic history and history of architecture. She explored the coffee merchants’ houses in the Yemeni city of Mocha to understand the anthropological structures of the port city at a time when it was the hub between the Arabian Peninsula, Asia, and Africa. As early as 2011, the collective project directed by Jocelyne Dakhlia—which already aimed to reassess the Muslim’s social life in early modern Europe—invited to go beyond the illustrative use of pictures by social historians. Dakhlia drafted new working hypotheses based on what the artists perceived and revealed, but that was ignored by the traditional materials on which social historians usually relay. In line with this research, the history of the Muslims in the Habsburg empire in the eighteenth-century is an instructive example of the contribution of art history to the understanding of the history of a population neglected by classical social history, as several iconographic documents illustrate.

In 1691, the Theatrum Europaeum offered a view of the 1684 siege of Ottoman Buda by the Habsburg army, and delivered an urban landscape rarely represented by Christian cartographers. Buda and Pest were conquered by Suleiman in 1526 and incorporated into the Ottoman empire in 1541. In the Theatrum Europaeum Buda and Pest are covered with mosques and minarets. (Fig. 1) 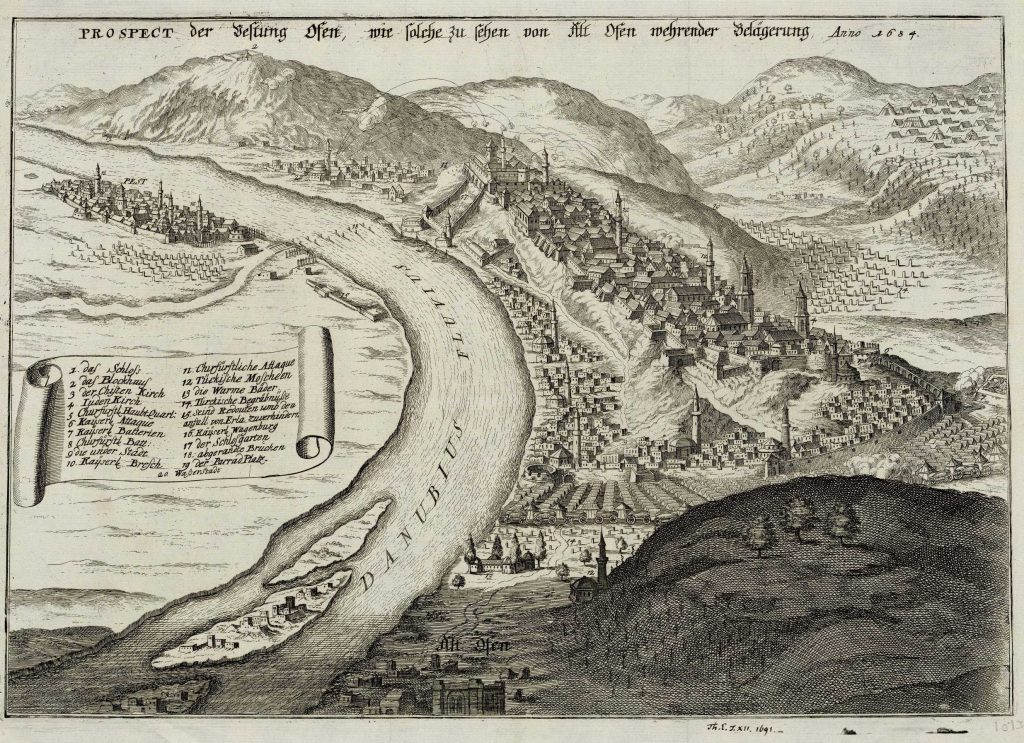 The engraving was undoubtedly inspired by the view published by Braun and Hohenberg in 1617. Buda is still distinguished by the mention of Protestant churches and a synagogue. The cartographer also distinguished the Muslim mausoleums under the Habsburg fire. Even more remarkable is the importance of the graveyards to the north and east of Buda and the southeast of Pest. This engraving leads to question what happened to the places of worship and graveyards after the Habsburg conquest of the Middle Danube River Basin, and the ethnic cleansing that accompanied it. If Muslims were expelled, forcibly converted, or massacred, archaeologists and art historians point to numerous reuses of Muslim cultural sites in the kingdoms of Hungary and Croatia all over the eighteenth century. Some transformations of mosques into churches are late. Some mausoleums even remained active, and more or less formal Muslim pilgrimages continued to be maintained. The church of St. Joseph in Buda, once the Jesuits expelled, left its doors open to Muslims: it was the former mausoleum of the dervish Gul Baba. The Ottoman merchants invited to trade in Vienna and crossing Hungary stopped there and could commemorate a family memory. In the Slavonia town of Illok, the memory and municipality are kept and celebrated in the Muslim mausoleums in which the urban elite recognized a part of its family identity.

Paintings and engravings also reflect the contribution of the Muslims—Ottoman or otherwise—to the economic development of Habsburg territories that have never been incorporated into the Dar al-islam.

For example, in 1780, the Austrian engraver Johann Andreas Ziegler (1749–1802) delivered a view of Vienna from one of its most vibrant suburbs, the Leopoldstadt, and entitled Die Schlag-Brücke. (Fig. 2) 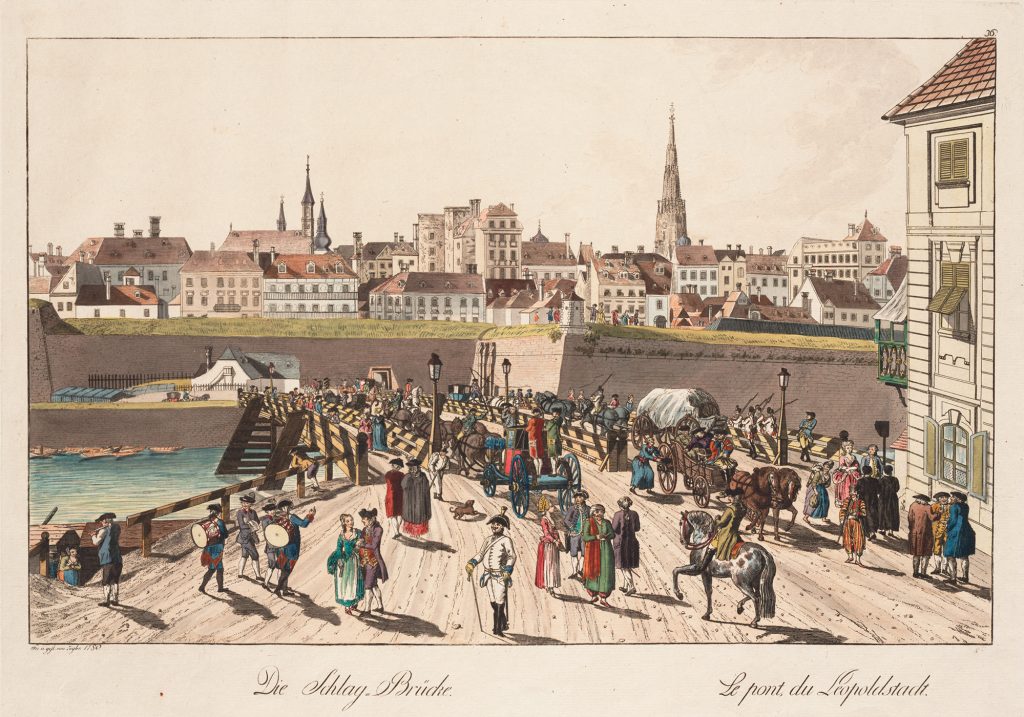 Ziegler pictured a densely populated and busy city: he illustrated a diverse crowd and evoked the different social statuses and professions of Vienna society. In the foreground and the middle of the crowd, he placed a Muslim merchant wearing a turban who keeps his accounts while roaming across the bridge. This engraving can be compared to the Hoher Markt engraving by the Vienna painter Carl Schütz (1745–1800) in the early 1790s, which, in a motif inspired by Raphael’s Scuola di Atene, showed two oriental-dressed merchants in the middle of the square, around which the economic activity of the square was organized. Also worth mentioning is the view of the Platz der Jesuiten attributed to Canaletto (1721–1780) around 1759. A group of merchants wearing turbans is walking towards the Ober-Bäckerstrasse (today’s Sonnenfelsgasse), which in the 18th century was home to numerous inns for international travelers and traders.

While the history of the diasporas has mainly focused on the history of the Christian and Jewish merchant minorities in Vienna, the history of the Muslims has been carefully ignored or reduced to anecdotal evidence. In the present case, engravings and paintings invite historians to question the available materials with a fresh angle. Indeed, in the second half of the eighteenth century, the trade administration of the Habsburg empire did record the activity of Muslim merchants in Vienna. These merchants are mentioned in the same series, documents, and sometimes the same page as Armenian, Greek, and Sephardic traders from the Ottoman Empire. Historians have ignored them for ideological reasons or because of a heuristic bias. An art-historical perspective invites to be skeptical of community categories that may exist more in the minds of historians than in the society being studied. Also, a study of the Ottoman merchants in Vienna in the second half of the eighteenth century demonstrates that the latter’s activity articulated the residential area of the Hoher Markt, the space for trade and merchant sociability of the Fleischmarkt (in which the Bäckerstrasse was located) and the port area of the Leopoldstadt. In other words, the materials of the Trade administration confirm what the artists painted. To a certain extent, Ziegler, Schutz, and Canaletto also reflected the image of an Ottoman population scattered throughout the city’s streets and whose social life was characterized as much by its incorporation into the various groups that made up Vienna as by community life.

Trieste is another interesting case. The painting La Riva Carciotti by Giovanni Pividor (1816–1872) around 1840 further illustrates the discrepancy in the history of the Habsburg monarchy between the emphasis put on the Greek merchants and the denigration of Muslim history. (Fig. 3)

Pividor painted the free port of Trieste built in 1719 on the old salt works of the city. On the right, he represented the merchant ships that unload their goods on the quay, in the center of the painting, and on the left the palaces built with the incomes generated by the Eastern trade. The people in the port are characterized by the important part occupied by racialized individuals wearing turbans or fez. Pividor represented Muslims of different social statuses. One can distinguish the richly dressed merchants from the servants who load and unload the ships. All around, we find, as in Ziegler’s engraving, the urban society, also represented in its diversity and with which the Muslims mixed. Pividor’s painting responded to the engraving by Jean-François Cassas (1756–1827), which offers a view of the city and the free port of Trieste from the lazaretto Santa Teresa that embodied the close relations between Trieste and the Ottoman world. If Trieste is often described as “La città dei gruppi,” the contribution of the Muslims to the history of the free port is almost systematically neglected. The Italo-German archives of the Intendenza Commerciale and the Governo di Trieste recorded in Trieste and Vienna, although incomplete, document their presence, economic activity, and social life. Apart from a formal community organization, Muslims’ lives in Trieste were comparable to that of other Ottoman subjects.

These brief examples show us that art history is of considerable interest for the renewal of urban history. The history of art and architecture makes it possible to identify populations sometimes neglected by historians and to implement new categories of analysis. The family, the household, the street, the neighborhood, the municipal memory, were at the core of eighteenth-century urban landscapes. Taking their figuration into account adds many levels of complexity to a history and anthropology of eighteenth-century migrations that are tied up in a study of diasporas and ethno-confessional communities. Art history is also a powerful instrument to nuance a dominant masculine, white and Christian history of early modern Europe. The circulation of the engravings participated in the promotion of a city whose cultural and religious diversity was seen as a testimony of good economic health and good government. The circulation of engravings accompanied the topographies’ one. It participated in the production of an aesthetic of the eighteenth-century cosmopolitan city and in the establishment of a normative framework that, for a time, promoted diversity. This “world of yesterday” flourished until the affirmation of nation-states.

Melissa Calaresu, ‘Making and Eating Ice Cream in Naples: Rethinking Consumption and Sociability in the Eighteenth Century’, Past & Present 220/1 (2013), 35–78.

David Do Paço, ‘In the Blind Spot of the State: Trieste in the 18th-Century Trans-Imperial Adriatic Society’ in Cornell Zwierlein ed. The Power of the Dispersed. Early Modern Global Travelers beyond Integration (Leiden/Boston: Brill, 2022), 365-88.

Zlatko Karač, ‘Turkish-Islamic Architecture in 16th– and 17th-Century Croatia: Issues of Assessment and Reconstruction,’ in L. Kudumović and A. Idrizbegović-Zgonić (eds), Fourth International conference on Hazard and Modern Heritage. The Importance of Place (Sarajevo: CICOPBH, 2011), pp. 442-59.

Nancy Um, The Merchant Houses of Mocha. Trade and Architecture in an Indian Ocean Port (Seattle and London: University of Washington Press, 2009).