One afternoon during the Paper in Motion symposium at the Arnamagnæan Institute, Copenhagen, our group of paper conservators, literary scholars, archivists, and digital humanists attempted to twist and clip small pieces of wire onto a mould to make a watermark. Having abandoned several more ambitious designs, I settled on a watermark in the shape of a boat: a half-moon shaped base, topped with a single sail. The wobbly result only vaguely captured some essence of boat-ness, but, as my freshly-made sheet of paper dried on a sheet of blue felt, I began to dwell on the aquatic connections between watermarks and the act of papermaking. It was by generating these interdisciplinary modes of thinking – in this case, moving between the material realities of papermaking, and the creative impulses of my own literary training – that the Paper in Motion workshop formed new connections between its participants’ differing areas of research. 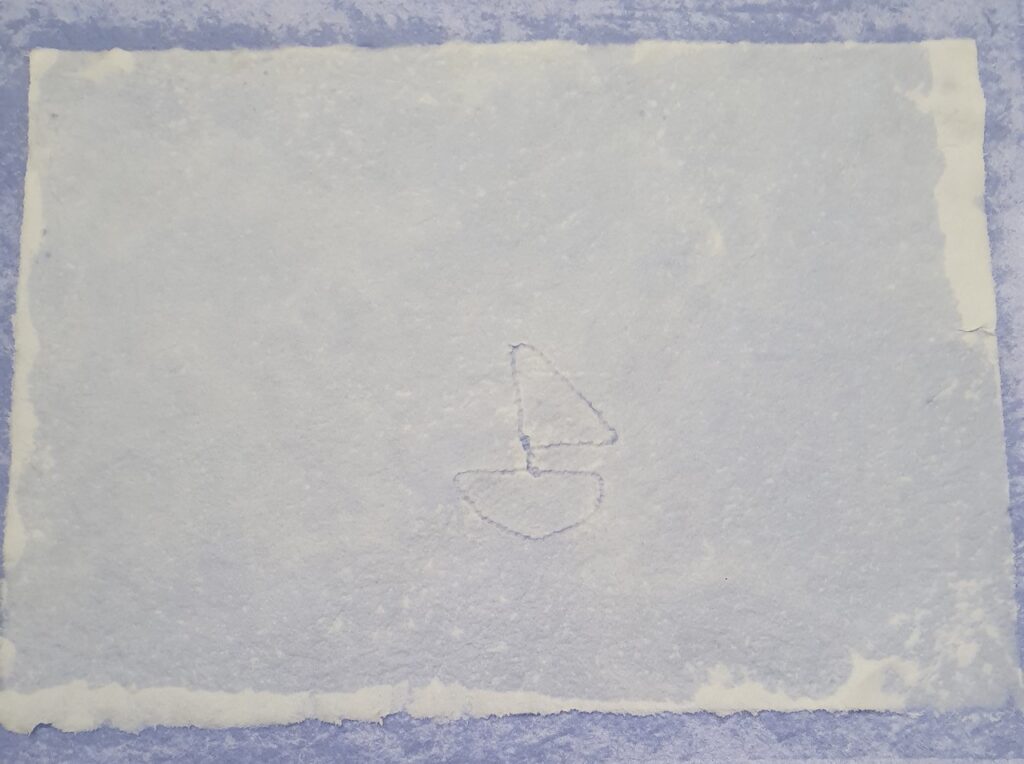 Where did the word watermark come from? In its first uses, a ‘water mark’ had nothing to do with paper at all, and literally signified the level reached by water either at high tide or against the side of a boat. Thus in 1578 the explorer and travel writer George Best described ships being ‘heaued vp betwéene Ilandes of Ise, a foote welnéere out of the Sea, aboue their watermarke’ (A True Discourse of the Late Voyages of Discoverie, for the finding of the passage to Cathaya, 1578, sig. G3v). By 1679, John Dryden assumed that everyone was familiar enough with this sea-faring term to deploy it metaphorically, describing Aeschylus as a man who was ‘always at high floud of Passion, even in the dead Ebb, and lowest Watermark of the Scene’ (Troilus and Cressida, 241, ll.25–6). The creative affordances of watermarks led Thomas Dekker to write that the fear provoked by a ravaging tempest was only assuaged by a rainbow: ‘had not the Rainebowt beene a watermarke to the world, Men would haue looked for a second Deluge’ (A Knights Conjuring Done in Earnest, 1607, sig. Bv). The watermark here retains its earlier meaning of the water level, but is transferred onto a cosmic scale in which the rainbow, whose appearance signals the end of the downpour, is imagined in spatial terms as ‘a watermarke to the world’.

None of this would impress many bibliographers, in whose field the term ‘watermark’ is useful in its most practical and precise sense. Philip Gaskell explains that watermarks are ‘pictures or letters fashioned in wire and sewn with knots of fine wire to the surface of the mould so that their images appeared in the paper along with the chain and wire marks’ (Gaskell 1972, 61). The OED gives the first use of ‘watermark’ in this sense to Thomas Hearne (d.1735): an antiquary, diarist, and friend of John Bagford. In 1708 Hearne received a letter from Bagford asking for ‘translation of any passage in Greek or Latin relating to the antiquity of paper, parchment, or ink’. Bagford was apparently ‘curious in his observations of bindings’ and ‘has sent specimens of old paper (for water-marks, etc)’ (Remarks and Collections of Thomas Herne, vol. 2, 98. The manuscript in question is Rawl. 21.3). Watermarks here become clues in a trail of bookish detective work, through which Bagford and Hearne might together begin to construct a history of the book.

The simultaneous use of ‘watermark’ for these two different senses – the traces of a body of water at its most brimming, and the imprint of a moment in paper’s production – are a reminder of water’s significance to the making of paper sheets. While water does not directly cause watermarks (the impressions on the sheet are not left by running rivulets of water, but by the disturbances to the distribution of the fibre caused by the wires), water is essential to the making of paper sheets on which watermarks are reproduced in the first place. Pulping rags (a process sped up by the invention of the Hollander beater which, despite its name, originated in Germany at the beginning of the eighteenth century (Hunter 1974, 163)) requires a great deal of water. Paper sheets emerge almost magically from the watery contents of the vat; and, when it has been pressed and dried, paper needs to be re-dampened before it can be effectively printed on.

Water is key to the making of paper, but water is also one of paper’s greatest enemies. The great flooding of Florence library in 1966 destroyed thousands of books; meanwhile rare book libraries and archives maintain their collections in temperature- and humidity-controlled environments to prevent deterioration. The reason you can’t bring coffee, or even water bottles, into many reading rooms is not to enforce some kind of performative mind-over-body sense of studiousness, but because an accidental smattering of liquids onto books leaves potentially destructive traces that, repeated over time, renders those books unreadable or even unusable.

In 1620, the prolific writer and self-coined ‘water poet’ John Taylor wrote a poem entitled The Praise of Hempseed which dwelt on the perilousness of water to paper. Having sung paper’s praises as a versatile writing surface for ‘Philosophers and ex’lent Poets’ (E3v) as well as a substrate for texts on laws, astronomy, and ‘physick’, Taylor’s imagination soars above the writing desk to the post- or non-textual affordances of paper. He describes a journey down the river Thames in a paper boat – a journey which, unsurprisingly, has near-fatal consequences:

Our Boat a female vessel gan to leake

Being as female vessels are, most weake[…]

The water to the Paper being got

In one halfe houre our Boat began to rot […]

Our rotten bottom all to tatters fell

And left our boat as bottomless as hell (sig. Fr).

The very vehicle which is supposed to take Taylor and his companion to safety proves, because of its materiality, nearly fatal:

The tossing billows made our boat to caper,

Our paper forme scarce being made of paper (sig. E2r).

Taylor’s paper boat threatens to revert to its watery beginnings: a swirling mass of insubstantial stuff from which its sheets initially emerged. Paper is water/marked both as water drains away to form a sheet on the mould and, as the imaginary world of this poem makes clear, when a sheet’s fleeting moment as malleable writing surface or reading matter disintegrates into a soggy end.

In 1630, The Praise of Hempseed was reprinted in John Taylor’s Workes: a large folio volume of sixty-three texts in which the story of the paper boat is placed alongside Taylor’s other travel narratives to York and Edinburgh, along with satirical poems, and epigrams, and sonnets. The pot-shaped watermark legible in Taylors’ Workes is, I think, that identified in Gravell as Pot.436.1. Gravel’s image of this watermark is from some letters between one William Booth in the Netherlands and his brother John in London, dating to 1628. The watermark identifies the Booth brothers’ letters and Taylor’s Works as originating from the same paperstock: they are marked with the stamp of a shared starting point. If The Praise of Hempseed tells one tale of paper in motion from London to Queenborough down the river Thames, its watermark impresses upon us another kind of travel narrative undergone by this sheet. That narrative begins in a watery vat where the future Works are mixed in with other potential texts, and continues on to the printing houses of Elizabeth Allde, Bernard Alsop, Thomas Fawcet, and the bookshop of James Boler where Taylor’s writings are printed and sold.

Watermarks tell stories about the paper trade but they also invite us to think about the literary affordances of those bookish realities, and of the ways in which water imaginatively leaves its mark on the texts imprinted on paper’s sheets. Making watermarks at the Paper in Motion workshop taught me something about the process of paper production – the fiddly difficulties of sewing wires onto a mould – and, at the same time, opened up new readings of Taylor’s The Praise of Hempseed and the creative affordances of textual materiality as it preoccupied early modern writers.

Biography: Georgina Wilson is Early Career Research Fellow at Fitzwilliam College in Cambridge. She obtained her doctoral degree in Oxford with a thesis on Paperscapes: Navigating Books in Early Modern England. Her current book project–titled Paper and the Making of Early Modern Literature–deploys literary theory, close reading, and book history to tell a precise yet comprehensive story about the role of paper in the book trade and the early modern imagination.

George Best, A True Discourse of the Late Voyages of Discoverie, for the finding of the passage to Cathaya (1578)